Looks like Lisa Wilson-Foley has a John Rowland problem 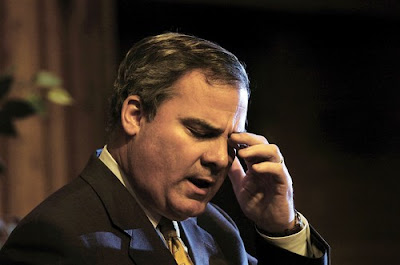 It’s been a tough couple of days for Lisa Wilson-Foley…and she has no one to blame but herself.

The Republican candidate in the 5CD problems stated a few days ago when the Register-Citizen reported that back in 2010, the former governor and convicted felon offered to assist Mark Greenberg’s Congressional campaign, and “he be paid through the candidate’s nonprofit animal shelter.”

Chris Cooper, director of communications for the Greenberg campaign, confirmed in an email that Rowland and Greenberg discussed the possibility in the candidate’s 2010 campaign “prior to Mark deciding to run for any office.”

“The initial contact came when Mark first expressed interest in politics — months before he decided to run for any office,” Cooper wrote on behalf of the campaign, responding to an emailed inquiry. “Never having been involved in politics before — a mutual friend put Mark and John together for Mark to get a better understanding of what running for public office was all about.”

According to Cooper’s response in the email, Rowland proposed being paid through the Simon Foundation, the nonprofit animal shelter Greenberg operates with his wife, Linda.

Greenberg “turned down the proposal,” Cooper said in the email.

When asked if that business relationship, during which Rowland worked with Apple Rehab in “consulting capacity,” ended prior to the start of Wilson-Foley’s congressional campaign, Healy replied “I cannot say that for certainty. I don’t know what the timeline was,” though he did say the relationship is not currently active.

This morning, 5th CD Republican candidate Mike Clark announced that he intends to file a complaint with the FEC regarding Lisa Wilson-Foley’s relationship with the former governor.

Oh, did I mention that Clark was also a former FBI agent who assisted in putting convicted felon Rowland behind bars…

“During my 22 years as an FBI Special Agent, I investigated and fought corruption in municipal and state government. With a team of agents and prosecutors, I worked to put politicians behind bars who used taxpayer dollars for personal interest, including former Governor John Rowland.

I am dismayed that Lisa Wilson-Foley appears to have turned towards the very corruption I fought by welcoming assistance from the formerly-jailed ex-Governor. An alliance between a Congressional candidate and a convicted felon who was found to have deceived the residents of Connecticut from the state’s highest office is mind-boggling. This does more than raise eyebrows – it calls into question the very integrity of Wilson-Foley’s campaign, particularly as evidence continues to surface regarding Rowland’s past attempts to receive campaign money from other candidates through illicit means.

My investigations ensured that Connecticut citizens have increased transparency and accountability from their elected officials. I call on Lisa Wilson-Foley personally to immediately provide the transparency required of a public servant.

Lisa Wilson-Foley must publicly disclose any and all agreements between Brian Foley, his associated businesses, and John Rowland. She must disclose all agreements between herself, her campaign, Apple Rehab and any member of the Rowland family. These disclosures must include all dates and amounts of payments, as well as full explanations for any non-disclosure to this point. Further, I have instructed my staff to file a formal complaint with the Federal Election Commission, seeking its investigation regarding this alleged activity.

Credibility and character cannot be overlooked in this race. In light of these questionable circumstances, condoning Wilson-Foley’s candidacy will only serve to hand the Fifth District seat to the Democrats.”

By mid-morning, the wheels came off the Wilson-Foley bus as other Republicans piled on. Fellow 5CD Republican candidate Andrew Roraback jumped on the bandwagon demanding answers from Wilson-Foley’s camp regarding Rowland’s role in the campaign.

Republican congressional candidate Andrew Roraback said he is sending a letter to his opponent, Lisa Wilson-Foley, asking that she release all information regarding the relationship between her campaign, the physical rehabilitation business owned by her husband, and former Gov. John Rowland.

“What we are asking her to do is to make herself available to the press and interested citizens to fully disclose all the details of the relationship that she and her husband have and have had with former Gov. Rowland,” Roraback said. “We’re asking her to do that because this campaign needs to be about the incredibly difficult and challenging issues facing our nation, and what we as candidates are offering as solutions.”

By afternoon, all hell broke loose.

Meanwhile state Republican party Chairman Jerry Labriola said he wants to meet with the Wilson-Foley campaign soon to discuss the matter. ” I intend to have a discussion with Lisa’s campaign in the next day or two to get a fuller understanding of the matter,” he said this afternoon.

Another Republican in the race, Afghanistan war veteran Justin Bernier, also raised issues about former governor’s role. “Republicans must be the party of truth and transparency — not the party of payoffs,” he said in an email. “Every campaign has a moral and legal responsibility to report who is being paid on their campaign.”

Get the popcorn ready as the trainwreck continues…I wonder if the Danbury GOP are having endorsement remorse right about now.