Gun show coming to Danbury (kids under 10 get in free)!?!

The Crowne Plaza hotel in Danbury says that a coming gun show at the hotel being advertised on the Web site of Big Al’s Gun Shows is not going to take place.

“It is absolutely not happening at this hotel,” Jamie Santacroce, the hotel’s controller, said by phone Tuesday afternoon.

Ms. Santacroce said that while Big Al’s has had gun shows at the hotel in the past and that the hotel had sent him paperwork for the show he wanted to have on Jan. 5 and 6, the gun-show organizer never returned the contract for the January show.

In any case, Ms. Santacroce said, “We would have canceled it regardless,” adding, “we wouldn’t have that sort of event here given the circumstances.”

Ms. Santacroce said that the hotel was trying to get the organizer to remove the listing from his Web site.

A man who picked up the phone at the number listed on the Big Al’s Web site declined to comment when asked about Ms. Santacroce’s statement.

Earlier today (before the backlash), it seemed that whoever answered the phone at Big Al’s had a different take on the matter…

A man who answered the phone number listed on the Big Al’s site said “yes” when asked Tuesday morning if the show was still on. When asked further questions, he replied, “I really have no comments, buddy.” When asked his name, he said, “Have a good day” and hung up.

Kids under 10 get in free w/adult. 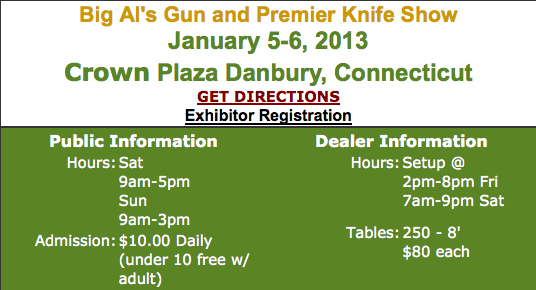