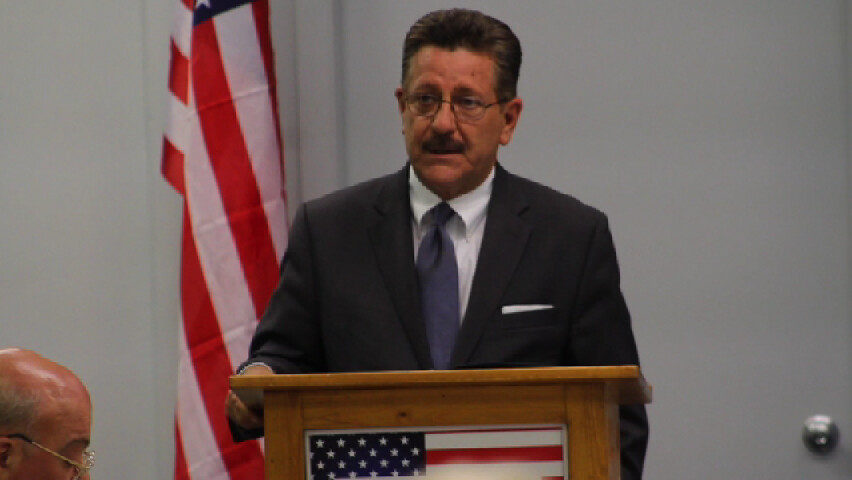 Gene Eriquez stepped aside Wednesday night as the leader of the city’s Democratic Party to focus on personal and legal problems surrounding the domestic violence charge against him.

“The issues at hand are ones that I am taking very seriously,” the 63-year-old former mayor told 50 people at Democratic Town Committee headquarters on Main Street.

“I have taken steps to address my personal issues and will act accordingly,” Eriquez read from a prepared statement. “Temporarily, I will step aside as I focus on my personal and family issues.”

His statement drew a short applause from Democratic Town Committee members and people in the audience — a reflection of the support he enjoys, tempered with concern for the seriousness of the charge.

Eriquez then left the building, declining to say anything more.

While there was nothing contrite or emotional about Eriquez’s written statement, he did pause to collect his composure after he read “Every marriage or relationship has its ups and downs.”

He then repeated what his lawyer told the judge in court on Monday about wanting to reconcile with his wife.

“While this event has clearly presented a challenge in our lives, I am committed to weathering this storm, and to work with my family on our relationship,” Eriquez read.

Eriquez is accused of punching his wife in the face after an argument escalated into a fight, the police report said. He is accused of kicking the victim in the back, striking her with a kitchen bowl, slapping the side of her head, pushing her down the hallway, and tripping her on steps, police said.

Once during the struggle, he chased his wife down and threw her cell phone to prevent her from calling 911, police said. The victim was later able to lock herself in a bedroom and call for help, according to the report.

In addition to the assault charge, Eriquez was charged with interfering with an emergency call and disorderly conduct — both misdemeanors.

He was too drunk to give a statement at the scene, according to police.

Eriquez’s statement hinted that he had not yet told his side of the story, although it did not elaborate.

“Although some statements and allegations printed are not accurate, on the advice of counsel, and for the sake of my family, I will not comment at this time,” he read.